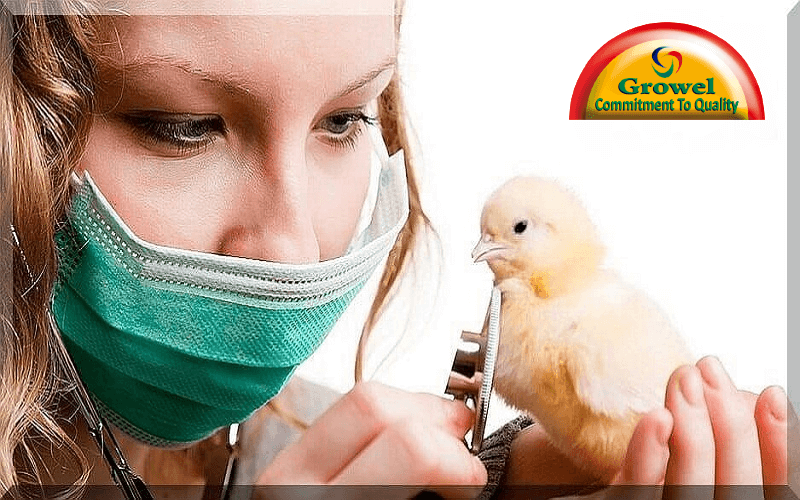 For the best poultry health management to be effective a primary aim must be to prevent the onset of disease or parasites, to recognize at an early stage the presence of disease or parasites, and to treat all flocks that are diseased or infested with parasites as soon as possible and before they develop into a serious condition or spread to other flocks. To be able to do this it is necessary to know how to recognize that the birds are diseased, the action required for preventing or minimizing disease and how to monitor for signs that the prevention program is working.

The key principles of poultry health management are:

As much as is possible poultry disease should be prevented. It is easier and less damaging to prevent disease than it is to treat . However, it must not be assumed that all disease can be prevented. Inevitably, some will get past the defenses, in which case it becomes imperative that the condition should be recognised as early as possible to allow treatment or other appropriate action to be implemented as soon as possible to bring the situation under control to limit damage to the flock.

A disease is any condition that interferes with the normal functioning of the cells, tissues, organs and systems. Diseases of poultry have many causes that include:

Direct transmission occurs when one diseased bird passes the cause of the disease via direct contact to a susceptible healthy bird. Such passage may be horizontal transmission (from one bird to another) or vertical transmission (from parent to offspring) via the egg or sperm either inside the egg or on the shell. Indirect transmission occurs when the causal organism is passed from one bird to another via an intermediate host such as insects, earthworms, snails or slugs, wild birds or animals or some other object such as equipment, food or water, vehicles, people, respiratory droplets, litter or faeces.

Causes of Infectious Disease in Poultry :

Organisms and microorganisms that have the potential to cause harm, such as disease in animals, are called pathogens or disease vectors. There are many different types of pathogens that may be transferred from one bird to another or from one flock to another by many different means. These pathogen types include:

Viruses are the smallest pathogens and can only be seen through an electron microscope. Viruses consist of an outer layer/s surrounding special protein material similar to the genetic material of the cells they invade. They can multiply and do harm only when inside the animal cell and if they invade and damage enough cells, the animal can show signs of that infection.

Antibiotics and other medications as a rule do not affect viruses and, as a consequence, there are very few medications that can treat diseases caused by viruses, although there are times when a drug may be used to control secondary infections. The best way to manage diseases caused by viruses is by quarantine and good hygiene to lower the challenge, and vaccination to maximise the birds’ immunity to future challenges. Some have the ability to survive for very long periods of time in the bird dander and feather debris, litter and manure, insects and rodents.

Bacteria are single cell organisms with a nucleus and multiply by simple fission, which means that one divides into two, and some can do this very quickly inside the host or in a suitable environment. Some are very fragile and do not survive long outside of the host while others may survive for long periods even in a harsh environment. Many have the ability to turn into spores by forming a very tough wall that protects them from most of the materials used to kill them. These types of bacteria are much more susceptible to these compounds when not in the spore form.

Bacteria may be described as being gram positive or gram negative. This characteristic is to do with differences in their cell walls that affects their staining for viewing under the microscope. Whether they are one or the other also influences their response to certain chemicals, including disinfectants.

There are several antibiotics and other drugs that are effective against different bacteria. However, quarantine and good hygiene that lower the numbers to be targeted by the drugs are the important first lines of defense against these organisms.

So it is always recommended to give sanitised drinking water to birds and spray disinfectant inside and outside of the farm . Aquacure is considered a good water sanitiser and Viraclean is a good disinfectant.

Chlamydia are a little larger than viruses. They live inside the cells they infect particularly in the cells of the respiratory system. They can be treated with antibiotics.

These are single cell organisms slightly larger than chlamydia. They have a cell wall and nucleus. The most commonly known disease caused by this organism is Mycoplasmosis or Chronic Respiratory Disease (CRD) caused by Mycoplasma gallisepticum. Diseases caused by Mycoplasma organisms respond to some antibiotics. These organisms do not survive long outside of the host and good quarantine and hygiene procedures coupled with a suitable house de-population period will provide good control.

Fungi are organisms larger than bacteria and are considered to be members of the plant kingdom. They multiply by forming spores that are released and enter the local environment. When conditions are satisfactory the spores start to grow to repeat the cycle.

Protozoa are single cell organisms larger than bacteria. Protozoa have a complex reproduction system that, in many cases, allows them to multiply into extremely high numbers very quickly. A good example of protozoan diseases is coccidiosis of poultry.

Protozoa generally harm the birds by destroying tissue. A number of chemicals have been developed that can be used to treat birds infected by the different protozoans. Others have been developed that interfere with the protozoan life cycle and may be used as preventive treatments while the birds develop a natural immunity. These preventive drugs are often referred to as coccidiastats.

While there are many different internal parasites found in poultry, only three are likely to cause harm. These are:

Prevention of Disease in Poultry  :

The principle need is to maintain control over the means of entry by disease causing organisms. These may enter by several routes:

The practice of good hygiene kills microorganisms, including those that cause disease, and all farms carry populations of microorganisms. Therefore, good hygiene practices are an important part of poultry health management. There is an overlapping in the use of the terms quarantine and hygiene.

There are a number of factors that influence whether a bird will succumb to a disease. These include:

Many disease outbreaks only occur because there are predisposing circumstances that ensure the success of the invasion by the causal organisms. Stress in the flock is a major factor in this regard. A high level of stress reduces the bird’s ability to fight the invasion by disease causing organisms. Stress, in this regard, may be environment extremes, overcrowding, nutrient deficiencies (even marginal deficiencies), infection, harassment or any other factor with the potential to stress the bird.

A good example of this situation is the disease, collibacillosis. Collibacillosis is caused by a bacteria called Escherichia Coli which is endemic in the environment and, provided normal standards of hygiene are practised and the bird is well nourished and managed, causes no real harm. However, quite often, an invasion by the organism Mycoplasma gallisepticum opens the way for the E. Coli bacteria to become virulent, or for more virulent strains to gain entry resulting in the disease collibacillosis.

From the point of view of flock health management, disease in poultry may be one of two levels of severity:

In each case, affected birds and in many cases recovered birds, are carriers that may be a source of infection for other stock with which they have contact and may transfer the causal organism either directly or indirectly to other stock not involved in this particular outbreak.

The Keys to Effective Vaccination in Poultry:

It is not possible to see most infectious agents. Therefore, it is appropriate to have a monitoring program. This may consist of:

In Poultry Health Management a very important skill for all poultry stock persons to have is the ability to differentiate between healthy and sick birds. It is normal when a flock is diseased to find healthy birds and those with varying degrees of illness. Therefore, it is necessary to be able to tell as early as possible when some of the birds in the pen are sick.

While the manager may be able to identify some diseases from available evidence, it is unlikely that they will be able to identify all. However, the sooner a disease is noticed in the flock, the sooner appropriate action can be taken. This may include initiation of a medication program, send specimens to the laboratory for examination and diagnosis, and/or to call in expert advice. Early action not only gives the manager a chance to cure the condition but it may help prevent it spreading to other stock.

A Healthy Bird Will Have Following Signs:

A Sick Bird Will Show Some or All of the Following Signs:

It is normal to find a continuous low level of mortality and a small number of unthrifty birds in the poultry flock. Even though this does occur, attempts should be made to reduce even this “normal” mortality. Normal levels will be in the vicinity of 4% to 40 days for meat chickens, less than 5% to point of lay for layer and breeder replacements and less than 1% per 28 days for layers and breeders.

So, for a better productivity and profitability in poultry farming ; a poultry farmer should follow proper poultry  health care management i.e. good housing, nutrition , vaccination , proper medication and following the rules of bio-security .  A good poultry healthcare management not only save from poultry diseases outbreak but a healthy grown birds will be more profitable because a poultry farmers will get a better price of their flocks.You should also read Poultry Medicine Schedule Chart

If you want to do poultry farming business or want to earn maximum profit in your poultry farming then please join our Facebook group How To Do Profitable Poultry & Cattle farming ?