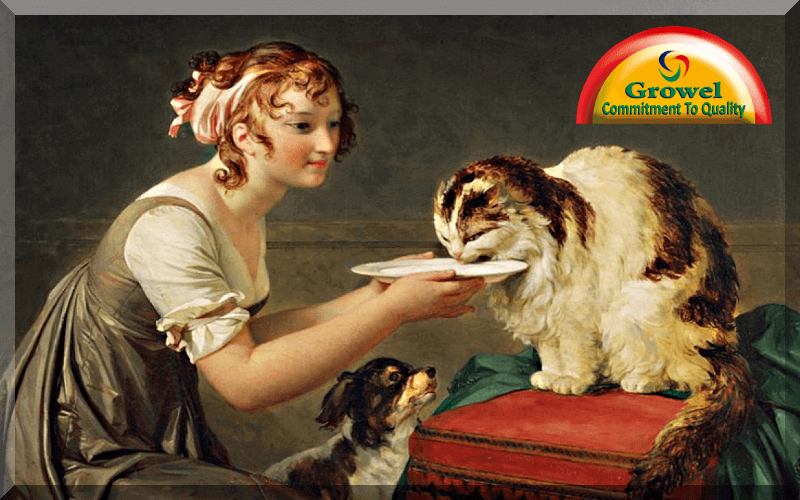 History of dog & cat were first domesticated in the Near East about 10,000 years ago. It’s blood and toil have helped humans discover new lands and build civilizations, and its use in war has helped topple the same. It has hunted alongside humans for centuries and has been hunted by man for food. As eyes for the blind and ears for the deaf, the dog has become an indispensable member of our modern society. But what really sets the dog apart from all the rest? Millions of dog lovers will agree that it’s the special loyalty and devotion the dog exhibits toward members of our own species—a characteristic that has justly earned it the proper title of “[hu]man’s best friend.”

The modern-day dog (Canis familiaris) descended from the wolf, with four distinct groups recognized.The first group, the dingo group, is descended from the wolves of Asia. Its members were dispersed throughout the Asian, African, and Australian continents. Modern-day descendants of this group include Rhodesian ridgebacks, basenjis, and the dingoes of Australia. One distinguishing characteristic of this group is that they don’t like to bark too much.

A second group of dogs, the greyhound group, is believed to have evolved from wolves inhabiting the open plains of central Asia, Africa, and the Middle East. The oldest member of this group, the saluki, is thought to have originated prior to 1400 B.C.! Distinguishing features of the greyhound group include keen eyesight and incredible speed, two characteristics that the Egyptians found especially useful for hunting purposes. Besides the saluki, other modern representatives include the Afghan hound, the borzoi, and, of course, the greyhound.

The Northern dog group is believed to have evolved from the large gray wolf of northern Europe. Generally regarded as one-master dogs, descendants of this group have been used for a variety of functions, including pulling sleds (Alaskan malamutes, Siberian huskies), hunting game (Norwegian elk hound), and guarding flocks (collies). A final group, the mastiff group, arose from wolves occupying the mountainous regions of Eurasia. Gifted with a keen sense of smell, members of this group were commonly used as war dogs and as hunting dogs. We still utilize the hunting skills of retrievers, setters, and pointers today. The mastiff, the St. Bernard, and the Great Pyrenees are a few of the more sizable members of this group.

Did You Know ? Dogs are believed to be the first animals ever domesticated by humans.

History of the Cat:

Like the dog, the cat is thought to also have wolf like ancestors. The modern cat, Felis catus, is a direct descendant of Felis libyca, the African wildcat, and Felis sylvestris, a European wildcat with a tabby like appearance.

Interestingly, over the years, the domestic cat has undergone only limited selective breeding. As a result, it has the closest ties to its “wild” ancestors when compared to other domesticated animals. Evidence of this phenomenon can be seen in the similar size and anatomic features of all cats. Except for variations in characteristics such as muzzle and coat length and color, different breeds of cats generally look alike. Compare this, if you will, to the dog, which comes in a multitude of sizes, shapes, and varieties, all brought on by selective breeding.

Cats first associated with humans back in the Stone Age, where they probably hung around camp for food scraps and leftovers. It was not until ancient Egyptian times that humans and felines became true companions. Cats were used to hunt birds and catch fish for the Egyptians, and to rid their granaries of rats and mice. So revered did the cat become in early Egyptian society that goddesses were fashioned after its image, and separate burial grounds were set aside for the mummified remains of those felines that departed from this world.

As the world trade routes opened up and the high seas became an important means of interaction between countries and peoples, the cat spread throughout the civilized world. Longhaired varieties soon developed, and became highly favored in the European community until the Dark Ages, when superstition began to run rampant and cats became symbols of evil and witchcraft. They quickly lost their preferred status, and the European cat population fell into decline. Unfortunately, when the Crusaders returned from the Holy Land carrying plague-laden brown rats with them on their ships, there were few cats around to meet this threat. As the bubonic plague devastated Europe, the importance of the predatory nature of the cat increased, and numbers were soon back on the rise. As they regained their status in society, cats found their way back into the farmers’ granaries and into the courts of royalty. To this day, in the eyes of millions of cat fanciers, they still command a royal status in our society !

Did You Know ? If we read history of dog & cat then we will find that the first evidence of feline domestication dates back over 9000 Years !

30,000 BC The earliest potential evidence for dog domestication, based on archaeological finds. Other evidence suggests dogs may have been domesticated thousands of years later.10,000 BC An elderly human in Ain Mallaha in northern Israel is buried cradling a four-month-old puppy. The find is the first suggesting a close relationship between humans and dogs.

7500 BC A cat is buried with a human in a Neolithic village known as Shillourokambos on the southern coast of the Mediterranean island of Cyprus. The find represents the earliest evidence for cat domestication.

1950 BC Cats begin to appear in the art of ancient Egypt. Their proficiency at killing rodents and protecting Egyptian homes from death and disease would soon lead them to be revered as gods

AD 200 Dogs are buried in Roman cemeteries with sentimental gravestones. One reads, “To Helena, foster child, soul without comparison, and deserving of praise.”

1233 Pope Gregory IX issues his Vox in Rama, which links felines to Satan and leads to the massacre of tens of millions of cats throughout Europe. Some scholars say the absence of cats led to an explosion of black rats, which brought the Black Death.

1500 Dogs begin to feature in scenes of domestic life in Renaissance art. In paintings from the time, canines take on human characteristics like love and sorrow, and feature as friends and companions.

1866 Henry Bergh founds the American Society for the Prevention of Cruelty to Animals (ASPCA), America’s first animal protection organization. The society initially focuses its efforts on New York’s horses, but it soon turns its attention to the plight of cats and dogs.

1880 Early flea and tick products begin to bring dogs indoors. Pets start to be seen as members of the family.

1893 Margaret Marshall Saunders pens Beautiful Joe, the “autobiography” of an abused dog who finds a loving home, one of the first told from a pet’s perspective. Mark Twain follows with his own pet autobiography, 1904’s A Dog’s Tale.

1894 A Baltimore judge rules that a cat is not property and thus can be stolen without repercussion. Dogs are similarly regarded as “worthless objects” in the eyes of the law.

1907 The vivisection of a dog at a London medical school sparks the Brown Dog Riots. Decades of debate over the use of cats and dogs in biomedical research would follow.

1929 The Seeing Eye, the first American guide dog school, is founded, ushering in an era of pets as assistance animals. Today, cats and dogs do everything from comfort children with autism to sniff out cancer.

1942 Dogs for Defense begins training canines to go to war. Today, canines are a critical component of the U.S. military. “The capability they bring to the fight cannot be replicated by man or machine,” General David Petraeus, former commander of US forces in Afghanistan, has said.

1954 The Humane Society of the United States is founded. Today it is one of the world’s largest animal welfare organizations.

1964 The Florida Supreme Court rules that pets are worth more than their market value. Cats and dogs aren’t just property in the eyes of the law; they begin to be seen as a special type of property that has interests and feelings.

1979 The Animal Legal Defense Fund is founded and campaigns for the rights of cats, dogs, and other animals in the legal system.

1990 The Americans with Disabilities Act requires hotels, restaurants, and other businesses to admit service animals, even if customers have allergies to or a fear of dogs.

1994 San Francisco ends the euthanasia of healthy dogs and cats in its three shelters, sparking the No Kill Movement.

2000 Stanley and Linda Perkins’s legal battle over their dog, Gigi, becomes one of the most expensive pet custody battles in US history. Judges begin to consider the “best interests” of pets in custody cases.

2000 Boulder, Colorado, becomes the first city to use the term “guardian,” in addition to or instead of “owner,” in its pet-related ordinances. Nineteen other cities and one state follow suit.

2000 The Uniform Trust Code allows owners to leave money to their companion animals after they die. Because the trusts are legally enforceable, animals denied their inheritance can theoretically be represented by lawyers in a court of law. The Uniform Trust Code has brought pets closer to being seen as “legal persons” than any other legislation.

2004 The largest veterinary malpractice damages in US history are awarded: $39,000 for the death of a dog. Critics say the rising legal status of cats and dogs could flood the courts, put veterinarians out of business, and even threaten industries like agriculture and biomedical research.

2006 The U.S. federal government passes the Pets Evacuation and Transportation Standards (PETS) Act, which impels rescue agencies to save pets as well as people during natural disasters. The act was inspired by the many owners who lost their lives during Hurricane Katrina, refusing to evacuate without their pets.

2012 The Maryland Court of Appeals rules that pit bulls are “inherently dangerous.” Hundreds of cities across North America ban the breed or impose tough restrictions on the dog. Some pit bulls are put on trial for biting people.

2013 Lackland Air Force Base unveils the US Military Working Dog Teams National Monument to honor the service of canine soldiers. Congress considers a bill that would reclassify military working dogs from “equipment” to “canine members of the armed forces”.

2014 South Dakota becomes the 50th state to adopt a felony animal anti-cruelty law. Some states impose penalties of up to $125,000 in fines and 10 years in prison for anyone who harms a cat or dog.You should also read Dog Diseases and Health Problems

You should join our Facebook group Dog & Pet Healthcare to get a regular updates for  your dog & cat’ healthcare guidance.